The room glittered and shimmered in the candlelight like the lights of a thousand upon a thousand stars. She laughed as she ran, her shoes click-clacking on the stone floors. But she soon threw her hand over her mouth. She couldn’t be caught. Not this time. She was determined to win the game, even though she had yet to. The sound of her father’s counting faded the farther she ran.

She soared across the golden floors—it was as if she was flying! She stifled another giggle before crouching into the tiny alcove. The alcove into which only she could fit—her favorite hiding spot.

Her patience growing thin, she was determined to wait it out. She wouldn’t giggle and give herself away this time—

Elizabeth woke with a start, her heart pounding wildly in her chest, only to be greeted by the wan light of the sunrise peeking through the old curtain on her tiny bedroom window. It had only been a dream.

A familiar dream. One she was fairly certain she had dreamt before.

But a dream, nonetheless.

Something oddly familiar washed over her at the thought of the glittering rooms. The laughter. The happiness she had felt. Had it been real? A memory? Even as the details slowly ebbed from her mind, she couldn’t put a finger on why they had stirred her so deeply. Yes, it must have only been a beautiful dream. So she stretched her arms high into the air and yawned with a sound she was sure was completely unbecoming.

With a sigh, she caught sight of the necklace that dangled from her neck—the stone and its crystalline center, sparkling in flecks of every color she could name and several too impossible for words, as glittering as the halls of which she had just dreamt. Beautiful, really. A trinket she had worn as long as she could remember—a mysterious link to her unknown past. For while she remembered every moment of her life here in Navah—every horse race with Ferryl, every picnic in their Secret Place in the cliffs, every stolen moment, every tender kiss—everything before it was a fog. A blur. A smear of oil across rippled glass. Close, so close, and yet untouchable. She was no one, really. Elizabeth probably wasn’t even her true name—just the name Bedell had given her when he found her. And for what felt like the thousandth time, she wondered if she’d ever know who she truly was. Spiraling down the chasm of her thoughts, she took hold of the stone and ran it along its golden chain as she stared out the window.

She thought about her father’s words, his implication that magic was somehow a sufficient explanation for what had happened to Ferryl. The mystery was no closer to being solved, never mind that it had been nearly a week since he had forgotten her. Or did not remember her. Or was cursed. Whatever.

Running the stone along the glittering gold chain, she breathed a sardonic laugh, knowing that by the end of all of this, either she or her father were sure to be proven a fool.

But at the moment, she didn’t really care which. All she could think about was the fact that the man she loved was likely due to arrive at the stables soon, as was his habit. And well, why would she miss an opportunity to see him? To even hold out the paltry hope that perhaps this had all been just a bad dream. Or that this ridiculous turn of events had somehow corrected itself.

She could not dress fast enough.

Thank you for reading the Sneak Peek Chapters of The Promised One: The Chalam Færytales. Want to continue the story? Click the button below! ~Morgan

The Promised One :: Chapter III 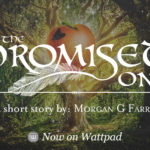 The Promised One: A Short Story
Scroll to top