I am so very thrilled to share with you something I have been working on for a long time (and consequently, something I’ve been *dying* to tell you about). I’d like to officially introduce you to the world of The Promised One, a fantasy series I’ve been writing since 2015.

I’m currently immersed in the writing/editing/writing more/editing more life that is novel creation. It’s a crazy world that I NEVER IN A MILLION YEARS thought I’d ever want to be a part of. But something just clicked in me one day about two and a half years ago, and since then, I’ve penned six (yes, SIX) full-length manuscripts, with plans for MANY more.

That being said, this is the very first work I’m sharing with the world. It’s set in the world of the series I’m writing, but it is not part of the major work. It was originally the prologue for the first book in the series, but as editing goes, it made its way to the cutting room floor.

I’ll say this: in the hours after I quietly released it to a select few, I was shocked at the amount of strangers who commented or contacted me to let me know that they wanted MORE, MORE, MORE. It certainly whetted my appetite for this whole world of online writing; and it gave me the gumption to say that perhaps I’m on to something. Maybe you’ll agree.

So without further ado, I am proud to introduce you to “The Promised One: The Fall”, a short story. I hope you enjoy reading it as much as I’ve enjoyed creating it.

The Promised One :: Chapter IV 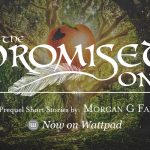 The Promised One: The Nameless Monster
Scroll to top