Okay, okay, I know…. it’s not a new book. I get it. You’re probably even rolling your eyes at me right now, wondering why in the world I’m making a recommendation for a book that is from the 1970s…

Here’s the deal. It’s perfect. I mean it. Fantasy. Romance. Humor. TONS of tongue-in-cheek sarcasm. So much satire… SO MUCH. It’s delicious, y’all.

If you’re like me, you grew up on the film. In fact, in my elementary school, superiority in the four-square game depended on who could quote the most lines from The Princess Bride. Guess who always won? *ahem* (In case you’re worried about my arrogance, don’t you fret. My superiority in movie-quoting would soon be thwarted by my marked disadvantage with anything remotely athletic.)

And if you’re also like me, it never occurred to you to actually read the book.

Lo and behold, at 35 years of age, I finally bought the novel.

And now I am sad that I never did before. Good lord, it’s perfect. I’m telling you. It’s the funniest, cleverest, sweetest, most brilliant piece in modern literature. Hands down.

And the author even fooled me. From the movie, and from the book, I had assumed that The Princess Bride was an adaptation of some ancient book by S. Morgenstern. William Goldman claims, throughout the book, that he is abridging one really long, boring book, to make it reflect the parts his dad read to him as a kid.

Sir William wrote the whole darn thing. And his asides are probably my favorite thing ever. I’m telling you, (finish this blog) and GO BUY THIS BOOK. RIGHT NOW. YOU NEED IT IN YOUR LIFE.

As a side note, I recently re-watched the movie, hoping to introduce my children to it, and make them fall in love with its brilliance. I had visions of my seven and five year old sitting with me by a crackling fire, giggling in all the right places, cowering at the sight of the shrieking eels…

But like so much of motherhood, I was sorely disappointed. They didn’t really care.

But I won’t give up. Just like Westley, I will chase them down until I make a believer out of them.

But in my re-watching of the film, I realized that somewhere, subconsciously, I must have written Prince Ferryl to be just like Westley. Those blue eyes. That messy thatch of blonde hair. That devil-may-care grin. His unfailing love for one woman, no matter the cost.

Yes, Prince Ferryl is my unconscious-now-conscious nod to perhaps my favorite man in literature.

And then read The Promised One. <—- shameless self promotion.

You’ll thank me you did. 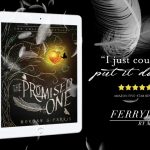 What’s up with the man hate?
Scroll to top
error: Content is protected