I grew up in church. Ok, more specifically I grew up in a non-denominational Disciples of Christ church and an evangelical, charismatic Church of God private school. And then I went to a Baptist church. Ok so, more accurately, I grew up denominationally confused. The liturgical, dogmatic church where I grew up was in stark contrast to the charismatic, evangelical spirit-filled church where I went to school. Whereas on Sunday mornings I was wearing robes and lighting candles, on weekdays I was casting out demons and dancing in chapel. Then when I became Baptist I learned a lot about rules and expectations, most of which were set forth by the Baptist Faith and Message.

Needless to say, when I got into my twenties, I grew tired of it all. I wanted to get down to the truth. I didn’t care anymore about what one denomination thought, or what another taught. I just wanted to know the Bible.

“It’s full of demons.”
“They’re a bunch of rich folks in a country club.”
“They’ve only grown the way they have because they’re in the richest town in America.”

I knew there was something to it, because if people were that passionate against it, something was up. And whether for good or bad, I wanted to find out what was going on. So I went – perhaps more out of curiosity, but I went, nonetheless.

And for the first time in my life, something happened to me that I never thought was normal, or even possible for a sane person – I fell on my knees and wept right in the middle of the service.

I didn’t know what it was back then. I had heard terms like “anointing” and “presence.” I didn’t really care, I just liked it and wanted more. There was something to this place. It was full of something I couldn’t explain. (I now know that something is the Holy Spirit, and He has changed my life.)

Growing up with a veritable smorgasbord of spiritual influences left me confused at best. I didn’t know whether it was better to serve God in reverence, never ask questions and live in fear, or if it was better to cast demons out of the oven when the rolls burned. (When I was a little girl, I would literally lay in bed a night casting demons out of my bedroom. Yes, mom, it’s true.) The turning point came when I decided to strip my faith down to the Bible and nothing else. And when I found a church that taught the same thing, I was hooked. All in, no looking back, you might as well hand over the Kool-Aid ’cause I’m drinking it.

And now I’m in a place spiritually that not only did I never think I would be, but I never thought I wanted to be. I’m that girl – you know the one – who prays in the spirit language (you know, that scary thing that only weirdos do, otherwise known as speaking in tongues), who has seen demons cast out, who believes in miracles – daily miracles, who experiences the presence of the Holy Spirit on a daily basis. I’m the girl who lifts her hands during worship and jumps in church. I’m the girl who lays hands on her children when they’re sick and teaches them to pray for themselves. I’m the wife who submits to her husband’s spiritual authority with joy because I know that he is submitted to the same God I am, and I don’t really have to worry about whether or not we will be on the same page. If we’re on God’s page, we’ll always be on the same page. I’m the girl that has faith that the bills will get paid even when there’s no reason they should on paper (and they always do). We’re the family that tithes even though we “don’t have it” and we see miracles continually because of it. We’re the family that gets excited about talking about sermons together, about talking about scripture we’re reading, about things we’re learning.

I never thought I would be that girl, that wife, that mother, that family.

I now understand that my varied denominational experiences each represented a part of the Trinity. My dogmatic, non-denominational church taught me about the awe and wonder of the Father God, the Ancient of Days. It was there that I learned about reverence, respect, and fear (the healthy kind). These things were good, but they weren’t everything.

It was in my charismatic private school that I learned about the Holy Spirit. He is power. He is everywhere. He brings life in dead places, dry bones becoming flesh. He heals, he revives, he restores. But He is not the only part of the Trinity.

It was in my Baptist church that I learned about Jesus. He died and rose again that we might be forgiven of our sins and live in heaven someday. He is Savior. He is redeemer. He is the one who sets free. He is the Son of God, God incarnate, Emmanuel. But he is only a third of a mighty three-strained cord.

It was at Gateway that I finally began to learn about a walk of faith in the power of ALL THREE – Father, Son and Holy Spirit. I have learned that each part of the Trinity is power, is meaningful, is vital, but any one part without the other, or any one part placed above the other is not a true representation of the triune God. And without all three, we can’t achieve the blessed life.

I write this today, convicted of the truth that many of my dear friends are stuck in one of three aspects of God without experiencing the fullness of His power in the Trinity. Some of you are in a church where you follow the rules, you give your due respect and you go home and wonder why you’ve never had a miraculous deliverance from a problem, or illness, or financial burden in your life. I’m here to tell you it’s time to welcome the power of the Holy Spirit in your life.

Or maybe you’re in a place where all you see is a spiritual battle around you. You live in fear of opening doors to demons at every turn because they lurk in corners waiting to attack. I am here to tell you that He who has overcome the world, has already overcome the enemy! It’s time to get back to understanding the power and wonder of the Ancient of Days.

Or maybe you’re not a believer at all. Maybe you think all of this is a bunch of bunk made up by a bunch of lonely, confused kooks. Maybe so. But us kooks are changed, set free, and will never be the same. Say what you will, but you can’t argue with that. It’s time you give Jesus a try. What have you got to lose? On the other hand, if you’re wrong, what then?

God the Father, Christ the Son and the Holy Spirit work in unity to bring victory, deliverance and power. I challenge you today to strip away your denominational filters, or your family heritages, or your preconceived notions and search for all of God in Spirit and in Truth. You will be amazed at the difference it makes.

To Santa or Not to Santa: That is the Question
When God Makes No Sense
Jesus Keeps Disappointing Me
I Didn't Have Time for God
A Song For a Friend
Sissy Men, Super Women, and the Troubles of the Modern Home
Atheism is Impossible (A New Year's Revelation)
The Bible is For Bigots (and Other Christmas Stories)
1 reply 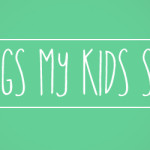 Things My Kids Say: No. 010
Scroll to top
error: Content is protected