I was reared to learn all the answers, stand on them and never waiver. I was reared that “if you don’t stand for something, you’ll fall for anything.” And I believe that. With all my heart I believe that. But the caveat is that I don’t believe I get the answers right 100% of the time. I believe that I can learn new things and apply them to my foundation without it negating any principle I stand on. I believe that as technology changes, science progresses, and the world moves on, new theories, discoveries, even belief systems can and will influence who we are and how we think. And that’s okay as long as we know where we stand.

I liken this to Galileo. As a physicist in Italy during the 1500s, Galileo was a man of reason and practicality before mysticism and ideology. When he concluded that the sun was indeed the center of our galaxy (as opposed to the earth), he was tried and found to be a heretic by the Catholic church and placed under house arrest for the rest of his life. You see, in the church’s eyes during that time, if man was made in the image of God and God placed man on earth, then the earth, by logical deduction, had to be the center of the universe. But scientific study proved otherwise. So which is right? The church for believing something based on their interpretation of the Bible, or science for deducting something based on mathematics, physics, and the laws of the universe?

Even though this was 500 years ago, we face the same types of dilemmas in faith today. Being reared a Christian all my life, I was taught that evolution is a lie. We did not evolve. We could not possibly have evolved. It doesn’t talk about it in the Bible, so it couldn’t have happened.

But what if it did? Can’t things change? Don’t they evolve over time? I mean, I just look at pictures of my family from the 1800s and it’s clear we’re different. The people then were smaller. Not a lot. Just subtly smaller. Isn’t that evolution? I don’t currently think that we evolved from monkeys or that any species, for that matter, evolved from one into the other. But why do we have species specific to their regions of the globe? If God invented an evolution-free environment, why do some species live in Africa that don’t live here? And why are they specially adapted to their environments (so much so that they would die anywhere else)? I was watching Planet Earth on Animal Planet the other day and I found out that there is a species of salamander that only exists in ONE cave in Mexico and NOWHERE ELSE in the world. That’s crazy!! Why? Why would that happen?

And is it going against all my Biblical foundational principles to consider the fact that evolution could, in fact, explain our world? Is it out of the realm of possibility, for example, that God designed the universe with a big bang? I believe that as knowledge increases and man builds upon what we know, we will deduce more and more fundamental truths about the universe with which we operate. And as we do so, I believe that it will (and does) all point to an intelligent designer. But why is it wrong to believe that the intelligent designer designed the world with evolution? Why is it wrong to believe that the intelligent designer used any of the scientific theories to make our universe work? I mean, if He is the intelligent designer, then didn’t he design those functions as well? Gravity? Inertia? Relativity? Evolution? And even if we do conclude that we all evolved from primordial soup, it still doesn’t explain where that soup came from. It didn’t appear out of nowhere, even by scientific standards. So who put it there? Why couldn’t God have made the earth in 7 days from primordial soup?

If we pigeon-hole our beliefs into what we currently understand about the world (both physical and spiritual) and never allow ourselves to think outside of that box, won’t we be missing out on just how glorious this intelligent designer is, after all? Think about Galileo. The guy just wanted to use the laws of science to explain his world. And when he did, he found out that some of those laws contradicted popular religious conclusions. So is he wrong or are the conclusions wrong? Ask yourself this: is your faith any less because you know that the sun is the center of the galaxy and the galaxy is only a pin drop in the greater universe? Or does it increase your faith all the more to know that the universe is so big we can’t comprehend it with our limited human minds? And that science, as it stands now, is not sufficient to explain everything that makes it work out there? 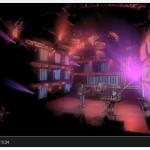