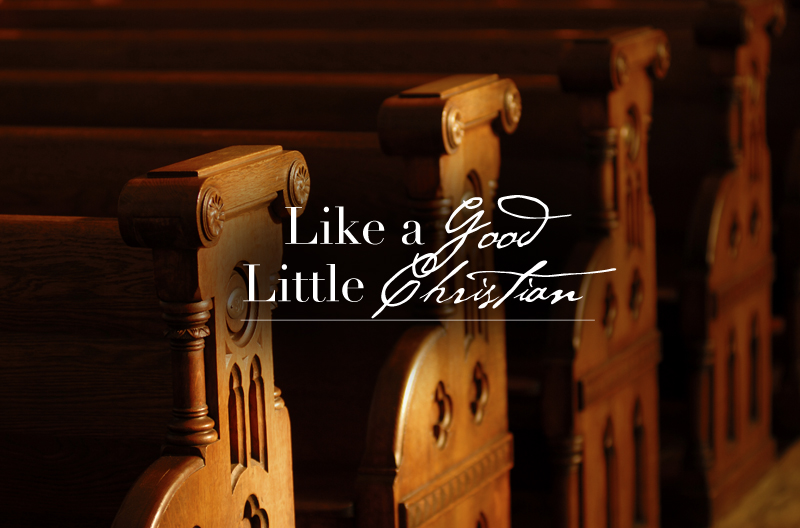 I used to be a good little Christian. I knew all the Christian-ese. I had a few key scriptures memorized. I did all the things good Christians do – I read my Bible pretty regularly, I went to church every Sunday, I listened to worship music in my spare time, I memorized popular Bible verses. I was really good at acting like a good Christian. And I counted it all as merits in my honor. I was doing a God a favor, I guess.

But the key word was “knew.” I memorized scriptures, I acted the part, to get myself into that “club.” I became someone I thought I was expected to become. And while I know that His Word never goes void, while I know that despite my Pharisee-like behavior, despite my dogmatic religiosity, God was changing me, I wasn’t doing it because I thought I needed to be changed. I was doing it because I wanted to impress.

Pride. I reeked of it.

But then life happened.

There came a point where my rose-colored glasses were smashed by the well-intended and not-so-well-intended. There came a moment of crisis where I stood on the edge of a cliff called religion, looking desperately for the bridge to the other side – to real faith. By the grace of God alone, I found that bridge. He led me there. And I crossed it. Ran across, honestly.

That was the moment I knew real faith. That was the moment I knew that the Bible isn’t something for good Christians to utilize for power or merit, it’s something for desperate, broken, lost, hurting, abandoned, rejected people to cling to as if their lives depend on it, because they do. The Bible isn’t meant for those who already have it together, as I thought I did. It’s for those who know they can’t get it together without Divine intervention.

It was in those moments that worship music stopped being something I critiqued for its musicality on Sunday mornings and started becoming something that brought me into the presence of the Almighty, giving me a taste of His glory, His goodness, His power, His overwhelming love. I will never forget the first time I experienced worship that literally brought me to my knees. I trembled with emotion, with an overwhelming sense of my need for Him. I cried that ugly, snotty, mascara-streaking cry that is neither attractive nor desirable in public places. And I didn’t care for a second. I knew I was smack dab in the middle of the presence of the Creator of the Universe and He wasn’t offended by my snot nose. So I worshipped. Oh how I worshipped.

If you grew up in church like I did, then you probably know how easy it is to make a religious routine. You probably know how simple it is to think you’re impressing God and others with your knowledge of the Bible and church things. But if you’re like me, that knowledge is nothing more than a pride-building lie that spreads its tentacles into every corner of your being, devouring you from the inside out. That knowledge won’t get you very far when you’re hurt, when you’re rejected, when you’re sick, when you’re broken. It might provide fleeting comfort, but if it’s not in your heart, in your gut, deeply rooted, watered daily, and growing, it will be nothing more than that – a fleeting comfort.

But when we take the Word to heart, when we let it be the Bread of life, the Water that quenches, the Breath of God we breathe in daily, we cannot help but rise to new heights of faith, of peace, of comfort, of joy, of Divine grace. That’s what I want. No more head knowledge. Deep, soulish, life-altering, mind-changing, soul-transforming faith. I don’t care about being a good Christian anymore. I care about knowing my Father in a way that drowns out all the rest of the noise the world throws my way. I care about resting in the arms of the One who loves me unconditionally. I desire deeply to press into the mind, the heart, the character of the Creator of the Universe. It is there and there alone I will find my hope.